This past year, NACF retired the debt on the purchase of 32 acres of prime farm land in North Amherst, MA with the support of local citizens, the town of Amherst and the Commonwealth of Massachusetts.  Following a brief celebration, the NACF Board of Directors made a commitment to the next phase of development for this historic farm property at 1089 North Pleasant St. – that is, restoring the home of the farmers!

The historic farm house on North Pleasant St. is a two-story wood and timber framed structure built by the Ingram family in the early 19th century; later purchased by the

Dickinson family; passed to the Dziekanowski family in the early 20th century; and purchased by NACF in 2005.  The house is currently in need of repair and rehabilitation to accommodate housing and business needs related to the current intensive, mixed vegetable and livestock farm managed by long-term lessee, Simple Gifts Farm.  Our intent is to renovate the 1833 farm house in such a way that both honors the history of the farm and provides affordable living space for farmers for years to come.

In May 2017, the Amherst Town meeting voted to provide NACF with Community Preservation Act funds to conduct a study of the farmhouse which examined its historic value and recommended necessary renovations to insure its continued use.  The following is an outline of the ownership of the property:

·      1878 – the farm ownership passed to the widow Betsey S. Ingram and their daughter Harriet, who married David Guertin, a local butcher and meat dealer. David Guertin died in 1885 and Harriet continued to operate the farm and the meat dealership with the help of her son Albert I. Guertin

·      1899 – Betsey Ingram and Harriet Guertin sold the farm to Nellie Graves Cowles Dickinson.  Nellie had married Edwin Harris Dickinson, who was a graduate of the Massachusetts Agricultural College (Mass Aggie).  Graduation photo below. 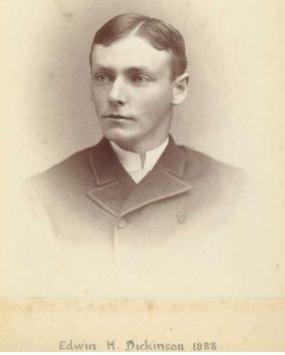 ·      Early 20th century –  most of the interior improvements that are evident in the house are made under the ownership of Nellie and Edwin Harris Dickinson from 1899 to 1931. The 1930 census lists two separate households: that of Nellie (Guertin) Dickinson and her son and daughter-in-law, Edwin H. Dickinson Jr. and Lydia S. (Nickerson) Dickinson

·      1932 – the farm sold to Chester and Rose A. (Wysocki) Dziekanowski, who developed the farm into a successful commercial dairy adding a new milking room and barn to the property

·      Early 21st century – the sole member of the Dziekanowski family remaining on the land was Edwin, who managed the farm as long as his health allowed

·      2006 – the farmland  was leased to Simple Gifts Farm; first on a short term (interim) basis, and then in 2017 as a long-term lease.  Simple Gifts acquired ownership interest in the farm buildings and constructed a new Farm Stand on North Pleasant St.

The history of the use and changes in the farm house provide an interesting story of how farming has changed in North Amherst over the past 200 years.  Initially a grain and livestock farm, market pressures caused by the opening of land in the midwestern U.S. following the Civil War and the construction of new railroad lines, forced the farm to transition into meat products and vegetables for local sales and shipping.  The change in ownership from the Dickinson’s to the Dziekanowski family resulted in a shift to a dairy operation during the later half of the 20th century.  More recently, the farm has emerged as Simple Gifts Farm managed by Jeremy Barker-Plotkin and David Tepfer.  It is a leading example of sustainable farming, serving the needs of the local community and keeping alive the historic use of this farm property in North Amherst.

North Amherst farms were influenced by the many forces as outlined in this discussion of farming in the 19th century. 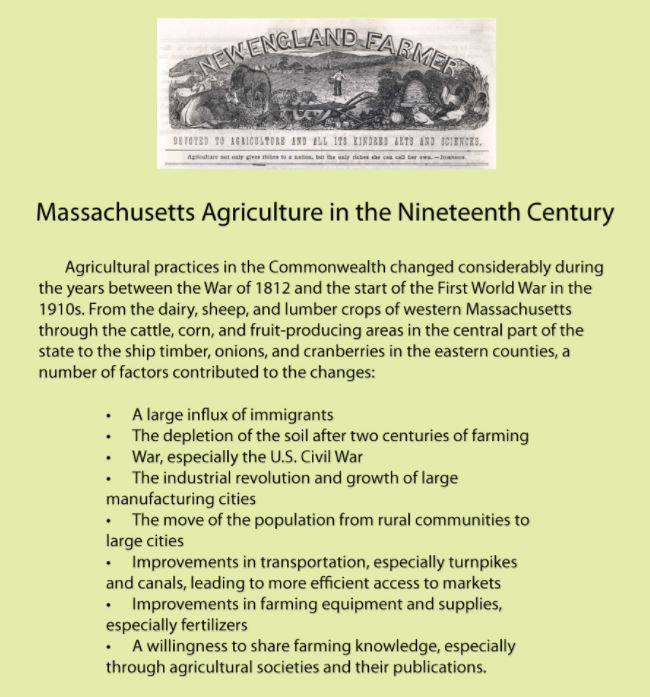 From a State Library of Massachusetts Exhibition

As farming changed with the times, the house itself evolved as well.  Initially, a largely Greek-revival home built around 1833, there is evidence of a significant renovation about 100 years later with the addition of a Colonial Revival style front porch with Roman columns flanking the stairs.  Internal modifications were made at this time and the house became a two-family farm house.

An important part of the next project is to restore the farmhouse as an historic presence in North Amherst.  The Ingram-Dickinson House is located just south of the North Amherst Historic District and has been submitted as a new entry in the Massachusetts Cultural Resource Inventory System (MACRIS).  The house represents a style typical to the Amherst-Hadley area with a broad symmetrical five-bay front elevation ornamented with Greek Revival-style corner pilasters and detailing. The scope of work will include the removal of mid-20th century asbestos cement siding, the repair and replacement of historic siding, replacement of the roof, and repointing of the foundation and chimney. 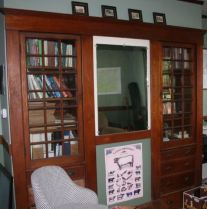 Using the results of the historical study, NACF has submitted an application to the Town CPA Committee requesting funds specifically for historic preservation to upgrade the exterior of the farmhouse. The funding request will cover removing the asbestos-cement siding and replacing with new clapboard; renovating the windows and adding good combination storm windows; replacing the roof and some other smaller but important renovation and restoration work.

The farmhouse is a truly important historic building — it dates from around 1830, and hs been continuously occupied by farmers and farm families since its construction.  And, of course, we are creating two units of affordable, permanently preserved housing for farmers in the future. 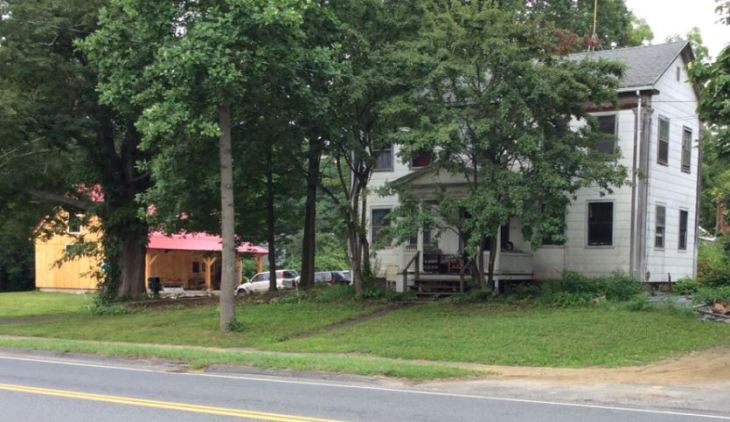 The character of North Amherst is based on a richly textured combination of historic buildings from the 18th, 19th and 20th centuries that represent the gradual subdivision of old farms and the changes inherent in any active community. We believe the repairs to the Ingram-Dickinson house will enhance the streetscape in North Amherst and contribute to the visual appeal of the village.

The North Amherst Community Farm is a small, local, not-for-profit organization devoted to preserving farmland and promoting sustainable farming practices in our community.  The capital campaign we completed in 2016 will preserve the 30+ acre farm property in North Amherst, MA owned by NACF and leased to Simple Gifts Farm

By northamherstfarm in history on December 15, 2017.
← North Amherst farm continues a tradition of creativity and change Farming in North Amherst – Part II →