As related in Part I of this story, the Dziekanowski heirs sold the farm property to the North Amherst Community Farm for perpetual preservation as farmland. A portion of the land is leased to Simple Gifts Farm which operates an agricultural training program for young farmers and houses student farmers and apprentices in the old farmhouse.

In 2004 the North Amherst Community Farm Inc. (NACF), a non-profit community organization, was formed to take advantage of an opportunity to preserve this 30 acre farm parcel as permanently and affordably available for farming. With the support of the Dziekanowski/Jekanowski family (who accepted the NACF offer over a larger offer from a housing developer), NACF purchased the farm, including the farmhouse at 1089 North Pleasant St. and a historic dairy barn, for $1.2 million.

Funds for the purchase came from the State Agricultural Preservation Restriction (APR) program ($320,000); from the Town of Amherst Community Preservation Act (CPA) program ($100,800); from the sale of three strategically excised housing lots ($320,000); from a first round of community fund raising ($115,000); and with a $400,000 loan from the Jekanowski family (a vendor loan with a ten year term). A second round of community fundraising from 2012 through 2016 was successful and the mortgage debt was fully retired by the end of 2016.

On September 20, 2016, the North Amherst Community Farm Board of Directors and friends celebrated by “burning the mortgage.”

NACF never intended to manage its own farming operation. Rather, we resolved to find a lease farmer who would commit to using the farmland to grow food for local consumption. Further, we wanted a farmer who would use organic farming methods and who would support NACF in creating a “farm community” around the land. In the Simple Gifts Farm duo of Jeremy Barker-Plotkin and Dave Tepfer, NACF found such a prospect – and even before the farm purchase was fully finalized, a Letter of Intent between SGF and NACF was exchanged, and SGF set about its farming operation.  Their first productive season was 2006. 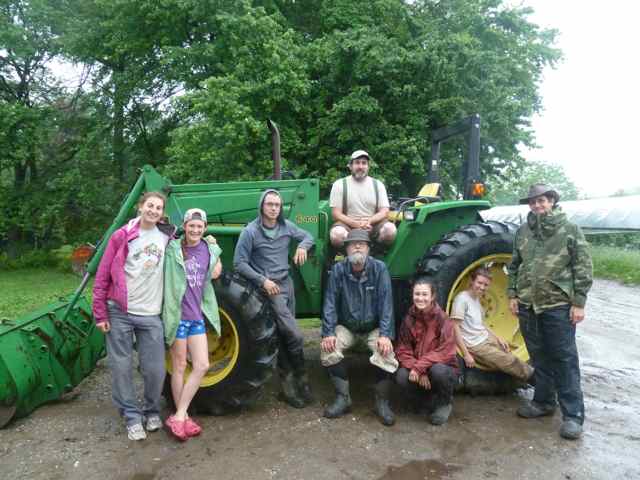 The aspirations / expectations of both parties were:

All of the above were formalized with an interim lease that was replaced with a 50-year lease with options to renew in 2017 when all debt obligations on the land and farmhouse were discharged.  Now the farmers have complete security whilst retaining affordability for the future farmers to whom Simple Gifts will eventually transfer the lease.

For more on the history of farming in North Amherst, MA see: History.